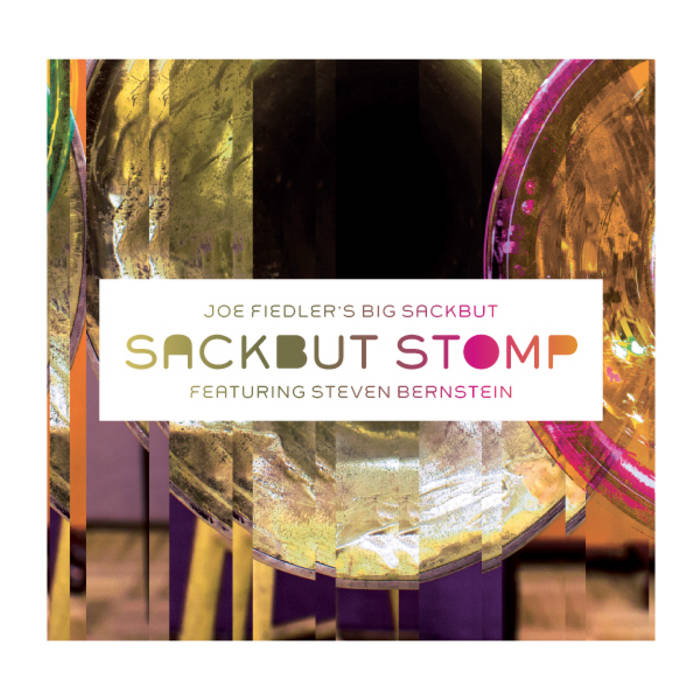 Joe Fiedler's newest recording, Sackbut Stomp, featuring Fiedler, Luis Bonilla & Ryan Keberle - trombones, Marcus Rojas - tuba, and very special guest, Steven Bernstein on slide trumpet (on Multiphonics Music, October 15, 2013), is the second recording from Fiedler's critically-acclaimed low-brass aggregate, Big Sackbut, and the follow-up recording to their self-titled debut. Fiedler's desire to lead a trombone-driven project was sparked in the 1980s after seeing The World Saxophone Quartet Live. It was a revelation to him, and eventually led to the recording of 2012's Big Sackbut. DownBeat Magazine said of the album, "The group rips, dances and converses . . . the quartet is so tight that they sound like one big, polyphonic low-brass organ. Each trombonist kills it." And eMusic.com proclaimed that, "The titular trombonist-composer manages the too-rare feat of creating art while having a blast . . . Here’s hoping that he and the three 'bones huff, puff and slide their way to another Fiedler-guided outing in the not-too-distant future." Fiedler has done exactly that, and more, with the upcoming release of Sackbut Stomp, a recording of great joy, musicality, depth and revelation.

On Sackbut Stomp the unique instrumentation is but one part of the experience. Fiedler is an artist who has been passionately obsessed with music since his childhood, and is fully committed to his craft as a trombonist-composer-arranger. He is intent on carrying on in the footsteps of his heroes (while blazing trails of his own), such as Albert Mangelsdorff, Don Pullen, Joey Sellers, Bennie Wallace, and his foremost influence on the trombone, Ray Anderson. This all-in devotion, coupled with an incredibly intimate knowledge of jazz and many of its branches (you would be hard pressed to meet someone so erudite about this music), is represented in the nine tunes on Sackbut Stomp.

The album opens with the appropriately named "Sackbut Stomp", a tune with an extended blues form, and a healthy dose of group improvisation (which features heavily on the band's first record and in their live performances), or a "collective blow", as Fiedler calls it. Next up is "King of the Road", which Fiedler explains, "When I asked Steven Bernstein to be a guest artist on this recording I was very excited that he was into it, and I wanted to be sure to have just the right vehicles for his unique voice. As a big fan of Steve's, I have many of his recordings as a bandleader. So in revisiting some of his older music some ideas started to come clear. One was that I have always loved how he was able to take popular music and beautifully deconstruct it, keep it swinging while still putting his personal stamp on it. Secondly, I love Steve’s use of colors and textures through the use of mutes and extended techniques. With those two things in mind I set out to find a known tune that would be fun and pliable. Growing up, my Dad had Roger Miller’s greatest hits and those tunes always stuck with me. Steve’s interpretation of the melody, his great solo and his hip 'lead slide trumpet' playing on the shout chorus lead me to believe that it was the right call."

One of Fiedler's original concepts for Big Sackbut was to write mostly original music, but to also cover songs by his favorite jazz composers. To that end, he has always wanted to play something by the great Bennie Wallace. Fiedler explains, "It was really just a matter of which one, as I love many of them. I first discovered Bennie and this tune (from the record, 'Sweeping Through the City') maybe 25 years ago when I was trying to find any record that had my hero, Ray Anderson, on it. I thought that '8 Page Bible' would be perfect, and for me it is really fun to hear each of the trombonists blow unaccompanied prior to each of their solos." Another of Fiedler's favorite songs by another composer fave, is "Tin Tin Deo" by Gil Fuller, who the trombonist got deeply into during his years playing on the Latin scene. "When I was with Bobby Sanabria’s Big Band, he commissioned me to write an arrangement of this tune for a recording. While much of the chart has its origins in Machito’s 'Kenya' recording, I greatly expanded it to incorporate a brass chorale section, a trombone solo and a big metric modulation to let it get away from the 'Afro' groove and swing for a while. When selecting material for Steven Bernstein, this one was a no-brainer. So many different melodies and moods that are all right in his wheel-house!"

Other highlights on Sackbut Stomp include Fiedler's favorite track on the CD, "Pittsburgh Morning", a loving tribute to his many fond memories of growing up in "The Steel City", and the wonderful jazz radio broadcasts that inspired him in his formative years. "While there was no full-time jazz radio in Pittsburgh in the 80’s, there was a morning jazz show on one of the public stations, WYEP. The DJ and host of the show played the hippest stuff and was always going on about his morning cups of coffee. But perhaps the best part of the show was his theme music, which was 'No More Words' by Betty Carter (from an old record on Roulette). That cat opened my eyes up to so many new artists that I wasn’t familiar with, and did it with so much love and spirit! I have always wanted to write a song for Pittsburgh, and somehow my thoughts of WYEP and Betty Carter led me to this melody." After the lush beauty of "Pittsburgh Morning", the band hits like a double espresso with "Feet and Breathe", which is Fiedler's mantra every time he picks up the trombone; "are my feet grounded without tension, and am I taking in the proper amount of air for the upcoming phrase." Fiedler has long been fascinated about incorporating certain languages used primarily in the avant-garde into more “traditional” jazz compositions. In this case he wrote “against the grain” melodies/harmonies played by the trombonists in the first theme. On another level, "Feet and Breathe" represent two parts of a mini two-part suite that may seem unrelated but are quite interconnected.

The last third of the album is comprised of "The Schlep", a tune inspired by Fiedler's experience playing with Eddie Palmieri (and a great vehicle for Ryan Keberle); "The Attic" (also featuring Bernstein), referring to "the attic in my Mom’s house in Pittsburgh. My formative 'listening' days were spent there. My tastes ranged from J. J. Johnson and anything new wave, to Anthony Braxton and Prince, or to Count Basie and Rossini. That was the place where my tastes and views of jazz and creative music in general were formed. Upon finishing this tune I thought, 'where the hell did this one come from?' I think that my initial answer was, Mom’s attic, but upon more reflection perhaps it’s the Brecker Brothers by way of Tower of Power with a little Kenny Wheeler thrown in for good measure. Well to me, at least; and concluding the CD, "Solo for Quartet", in the tradition of another one of Fiedler's heroes, Albert Mangelsdorff, he often writes music just for solo trombone using multiphonics. "I always want to continue to develop different styles of music for Big Sackbut and I felt that this was a good tune to expand into a quasi-legit piece. Additionally, I wanted to have a piece with a lot of counterpoint and independent lines that would take advantage of the unique personalities of each player," explained Fiedler.

For Cleo and Shari.