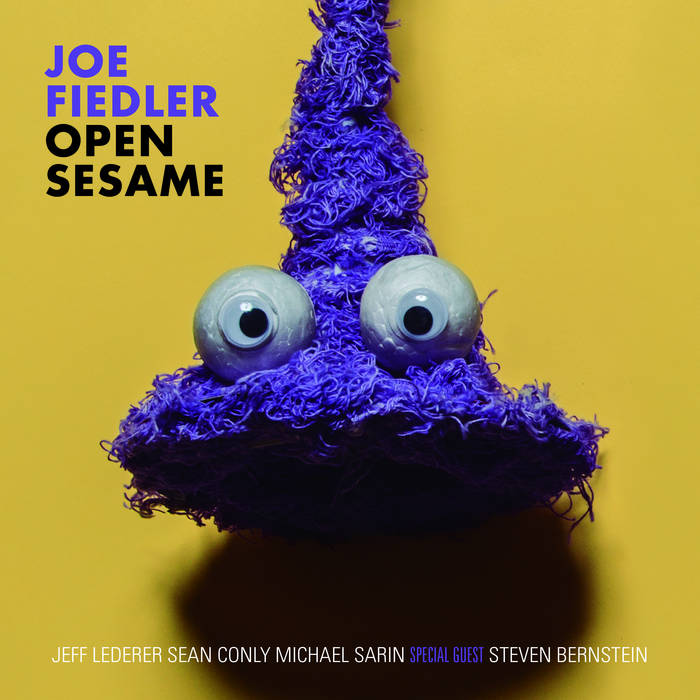 Do you know how to get to Sesame Street?

Or more precisely, do you know how trombonist Joe Fiedler - an accomplished jazz improviser and bandleader with sideman credits including Andrew Hill, Charles Tolliver, Satoko Fuji and a host of others - became a music director and arranger for one of the most beloved children's shows in television history?

It all started in March 2008 with a Broadway gig playing In the Heights, Lin-Manuel Miranda’s warmup for the monstrously successful Hamilton. As a seasoned pro making a living full-time on the Latin music scene (touring with Celia Cruz, Eddie Palmieri and other giants), Fiedler heard right away that the Latin-themed In the Heights arrangements could be better. He suggested fixes, which impressed Bill Sherman, the Tony Award-winning orchestrator on the gig.

Some months later PBS resurrected The Electric Company, another children’s TV staple of the ’70s. Sherman became music director and brought Fiedler on board as chief horn arranger. Coincidentally, Sesame Street was revamping its music department around this time, and The Electric Company is produced by Sesame Workshop, so one gig led to another. After three Electric Company seasons, Sherman and Fiedler arrived at Sesame Street as a package deal in September 2009. (Sherman is still the boss, Fiedler notes.)

From playing over 350 freelance gigs a year, Fiedler commenced work on what would become hundreds of Sesame Street arrangements, and thousands of underscoring cues. But he never stopped growing his reputation as leader, making swinging, angular, sinewy, sonically adventurous improvised music with the Joe Fiedler Trio on such albums as Sacred Chrome Orb and I’m In. He also launched the rollicking low-brass quartet Big Sackbut (three trombones & tuba), and fronted a quintet on his 2017 outing Like, Strange with saxophonist Jeff Lederer, guitarist Pete McCann, bassist (and Sesame Street session man) Rob Jost and drummer Michael Sarin.

For a while, Fiedler’s jazz life and show life had little overlap. But that was destined to change, and it finally has with Open Sesame, featuring Lederer and Sarin with bassist Sean Conly (making a rare and absolutely clutch appearance on electric), plus special guest Steven Bernstein (mostly on valve rather than his customary slide trumpet). Fiedler confronted a familiar task in making the album, but this time with no bosses to please. He could do anything. Pushing things in a pronounced groove- and even rock-oriented direction (the “street” in Sesame Street, if you will), Fiedler took liberties while preserving the songs’ harmonic and melodic character. With the exception of “Doin’ the Pigeon” (a 1974 vaudeville dance number featuring Bert, transformed here into Motown-esque funk with a wry rubato intro), he had never worked on any of them for the show. They were a blank slate.

“A lot of the music I’ve been hearing in New York is so complex, and it’s great,” Fiedler comments, “but I wanted to do something fun. Coming up in the ’80s my favorite bands were the Jazz Passengers, Carla Bley, Ray Anderson, bands and musicians that had this sense of humor, this sense of burlesque. All these early Knitting Factory bands I loved — I got to New York at the tail end of the heyday of the downtown scene.” Steven Bernstein’s presence on roughly a third of the program, thickening the blend of horns and adding endless improvisational brio, speaks to a certain Sex Mob influence in Fiedler’s approach as well.

What clinched the decision for a Sesame Street album? “As the years went by I became really struck by the lore of the show,” says Fiedler, recounting conversations with “Elmo” originator Kevin Clash, who would regale him with stories of Jim Henson as well as Joe Raposo and Jeffrey Moss, the two primary songwriters and music directors from the early years. “Then I started getting to know the puppeteers, like Caroll Spinney who plays Big Bird and Oscar. He’s retiring soon, there’s a party planned for him. Caroll was very close with Joe Raposo, so the lore of these histories, these relationships, really started to intrigue me.”

With the exception of Joe Fiedler Trio Plays the Music of Albert Mangelsdorff (2005), much of Fiedler’s output has focused on original material. It was time for another interpretive foray, and the Sesame Street repertoire proved just the right creative vehicle. “I was digging into these songs and was amazed that they hadn’t become jazz standards,” the trombonist remarks. “Raposo’s chord progressions are as ideal for jazz as anything. They’d be standards if they came out in a different era. And they’re often very blues-driven.”

But this being children’s music, Fiedler noticed a preponderance of major keys — what could be more major than “sunny day, keepin’ the clouds away”? — and he felt compelled to mask some of the adorableness of it all. “I wanted some dirtier bass lines and a little more blues, and without a chordal instrument I had the leeway of putting the second [horn] voice into some nontraditional places, using counter melodies to evoke a less sweet sound.” Fiedler’s deftly calibrated multiphonics — playing one note and singing a higher note, sometimes producing an overtone to complete a chord — add a further layer of grit and grain.

At the time of this writing Fiedler and his colleagues were working on Season 49 of Sesame Street. The show’s archives by now are vast, and Fiedler dug through them, in some cases finding handwritten lead sheets and other eye-opening artifacts, in other cases finding nothing, realizing he had to transcribe some songs himself. The main focus is vintage material from the show’s formative days, with two exceptions: Chris Cerf and Norman Stiles’ “Put Down the Duckie” (1986), a riotous jump-blues feature for Hoots the Owl and Ernie (alto legend Lou Marini provided all of Hoots’ saxophone parts); and Joe Raposo’s “The Batty Bat” (late 1985), the only tune in a minor key, something akin to Tom Waits with an Eastern European tinge.

Among Raposo’s songs are such genuine cultural touchstones as “Sesame Street Theme,” “Somebody Come and Play” and “Sing.” The same could be said for Jeffrey Moss’ “Rubber Duckie” and “People in Your Neighborhood.” But Open Sesame delves into more obscure waters as well: “Has Anybody Seen My Dog,” another by Raposo, is a laugh-out-loud bit with Grover playing straight man to an increasingly desperate and unhinged pet owner. And “Pig’s Love Song”/“Magic Pig”/“Bein’ a Pig,” which could be called “Pig Suite” or perhaps “Suite Pig” (with two short free improvisations as segues), travels without a hitch from a New Orleans funeral feel to a calypso reminiscent of Sonny Rollins’ “St. Thomas,” finishing on a swampy Professor Longhair-ish note.

The band’s approach can be tongue-in-cheek, or straight funky, or unabashedly rocking, while remaining rooted in the ethos of jazz improvisation. Conly provides solid backbone and isn’t shy about unleashing his inner Geezer Butler or Lemmy as well. Fiedler, in addition to multiphonics, brings in Harmon and plunger muted timbres (though perhaps less so than on his prior recordings), while Lederer moves compellingly between tenor and soprano, playing with equal parts enviable control and pure abandon. And Bernstein, on valve trumpet except for “Rubber Duckie,” pushes Fiedler and Lederer in ways they never expect, adding fire to the solo rotations wherever he appears.

Last but not least, there’s a sub-grouping of ’70s-era tunes on Open Sesame with startlingly hip backstories. Interestingly, they all involve either counting or the ABC’s. These were songs that accompanied animated shorts made for Sesame Street by a third party, the San Francisco-based Imagination, Inc. In retrospect they are stunningly imaginative and ahead of their time.

“Pinball Number Count,” by Walt Kraemer (the company’s music director), featured the Pointer Sisters in a wild mixed-meter funk odyssey like something from Herbie Hancock’s Thrust, with burning solos from Mel Martin (soprano sax) and Andy Narell (steel pan). “Jazzy 10,” composed by piano great Denny Zeitlin, had none other than Grace Slick improvising on number themes while psychedelic fast-paced music swirled. “Jazz Alphabet,” performed in 1974 by Donald Byrd and the Blackbyrds, was a loose uptempo swinger and drum feature; with minimal adjustment it proves to be an apt, quasi-anarchic sendoff for Fiedler and the band.

Sesame Street, along with Mister Rogers’ Neighborhood, changed television by broadcasting a message of kindness, love, dignity, individual worth and not least of all fun. The parents who welcomed such an innovative show in 1969, who eagerly sat their kids down in front of it, are grandparents now. Joe Fiedler’s music is not your grandparents’ music, and yet one can imagine them appreciating what he’s done here — in fact, one doesn’t need to imagine. “Old ladies come up after the gigs and tell me they just loved it,” Fiedler says, “even though it’s nothing like the Sesame Street they know.” Turning people’s heads in this way, bringing them onboard by making the familiar startlingly fresh — this is one of jazz’s steadfast missions, and Fiedler takes up the work with admirable esprit.

For Shari and Cleo