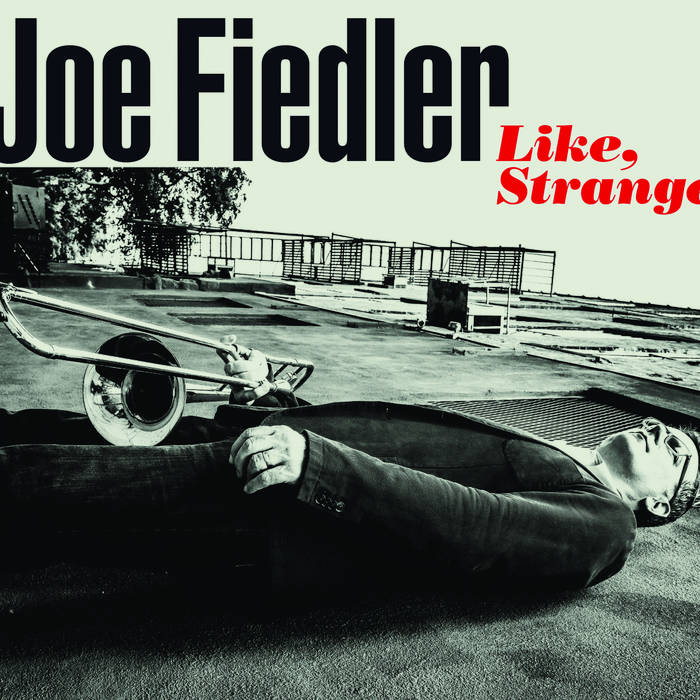 The imaginative and adventurous trio of trombonist, composer, bandleader Joe Fiedler, bassist Rob Jost and drummer Michael Sarin just accomplished the near-impossible; with the addition of saxophonist Jeff Lederer and guitarist Pete McCann they have broadened their melodic and harmonic range, and expanded rhythmically, becoming even more awe-inspiring. The Quintet is featured in all its splendor on Fiedler’s new recording, Like, Strange (available on Multiphonics Music on March 17, 2017). After thirteen years of leading his trio (documented on I’m In, Plays The Music of Albert Mangelsdorff, The Crab and Sacred Chrome Orb), and that format being his primary creative outlet, Fiedler felt the urge to expand. He explains, “after more than a decade of playing trio I still love it, but I found myself wanting to branch out and bring different colors and textures to my music. Thus I thought that it was time to add some people who were both unique soloists and great interpreters of music in general.”

Like, Strange, in many ways, is a continuation of the music from Fiedler’s previous critically acclaimed recording, I’m In (which also features bassist Jost and drummer Sarin). “In general, and similar to my previous recording, the compositions are more traditional forms and variations of traditional chord progressions, yet still pliable and able to handle both inside and outside playing. For my ears, adding Pete and Jeff turned out to be the perfect way to expand the trio and give it an added, richer depth of color and sound,” said Fiedler.

Joe Fiedler on Jeff Lederer: “Last year I was working as a sideman on a project along with Jeff and we got to talking about our shared and unique niche in the music world. We are probably the only two musicians that have been playing for years in both the ‘downtown’ jazz and hardcore Latin music scenes. So during a rehearsal I had an idea to loosely fuse these two worlds and make a project that played old school Latin boogaloos, but with a more open-freewheeling vibe. Jeff was into it and the expanded trio was set into motion. Then a funny thing happened. We started playing together a lot over the past year in many different configurations and I loved the hook up that we had. Suddenly the concept of the boogaloo became secondary to the idea of writing music that just felt good and highlighted the way that our sounds came together.”

Joe Fiedler on Pete McCann: “So I began writing music that had a Latin feel but I wouldn’t consider it ‘Latin Jazz.’ I realized how lucky I was to have Rob Jost and Michael Sarin, rhythmic masters who are quite able to handle any style that I wanted to bring to this project. I also realized that in order to fully embrace the harmonies and textures that I was hearing I was going to need a chordal instrument. Pete was the very first person to come to mind. I have played with him in many different bands for more than twenty years and his creativity and virtuosity are second to none, not to mention the sense of humor and positivity that he brings to the bandstand/studio/hang.

More on the music on Like, Strange:
GO GET IT – Inspired by one of Fiedler’s favorite composers, Jimmy Guiffre, With this tune the trombonist/composer was looking to write something a little playful. This has an unconventional, long form that starts as a jazz waltz and is broken up with half-time funk sections.

MAPLE AVENUE TANGO – Fiedler has always loved the tango and the way that guys like Dr. John and Bennie Wallace took a greasy approach this rhythm, so here he offers his take on it. “I love the way that the two horns trading solos turned out – Jeff’s idea, in the studio,” said Fiedler

A LADYBUG IN MY NOTEBOOK – This tune highlights Fiedler’s current interest in simple motifs and less angularity. After years with the trio he was quite happy to have another horn to create melodic tension. Note how the low register of soprano saxophone blends with the trombone, adding a nice change of texture.

LIKE, STRANGE – The title track “Like, Strange” was once Fiedler’s daughter Cleo’s assessment of his music. The composition was also loosely inspired by early recordings of John Scofield.

E.T. (For Eje Thelin) – Thelin is perhaps the most overlooked jazz trombone master of all time, especially in the U.S. Fiedler explains, “next to Ray Anderson, he is probably my biggest influence and I just really wanted to write something for him. He was known for his Coltrane-esque ‘sheets of sound’ in his improvisations.”

GUIRO NUEVO – “I have always loved the Guiro (the rhythm, not the instrument) and its infectious, hypnotic quality. I was always a big fan of the great Jerry Gonzalez and the Fort Apache band and their use of this rhythm,” commented Fiedler.

TUNA FISH CANS – This tune was inspired by Fiedler’s wife, Shari, and her use of the expression, “tuna fish cans,” while teaching Pilates. “The expression is just a verbal cue to help clients visualize the vertebrae in their lower back. She encourages them to try and separate and create space between the stacked cans. So I set out to write more of a classic Latin jazz tune with five ‘cans’ with a little separation between them,” said Fiedler.

QUASI… – Fiedler finally got around to tackling a boogaloo, however when completed he wasn’t so sure of its boogaloo-ness, hence the title.

YINZ – “Yinz” is a Pittsburgh expression meaning “you guys.” “For balance, and because I dig it, I felt that the arc of the recording needed some free improvisation and textural elements,” said Fiedler.

Mixed and Mastered by Mike Marciano at Systems Two Studios

Special thanks to Jeff, Pete, Rob and Michael for your beautiful friendship, spirit and music.

For Shari and Cleo.