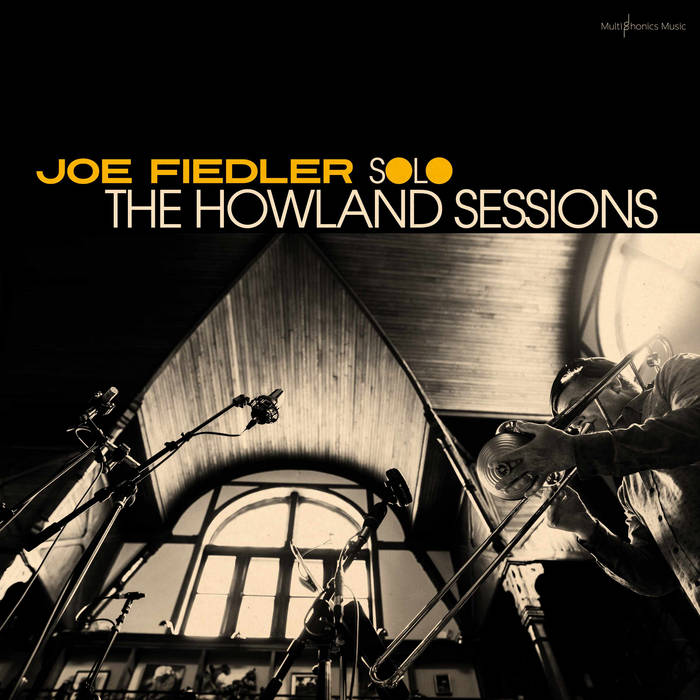 This August will mark the 50th anniversary of a landmark moment in the development of contemporary trombone playing: Albert Mangelsdorff’s first solo trombone performance at the Jazz Now! Festival in Munich in 1972. Though Mangeldorff already was a European jazz celebrity, his appearance at Jazz Now! broadened the public’s understanding of the possibilities of the instrument and inspired many generations of trombone experimenters, including Joe Fiedler. Fiedler has chosen to mark the anniversary of Mangeldorrf’s appearance at Jazz Now! with the release of his own contribution to the advancement of trombone solo performance on Solo/The Howland Sessions.

The story of Mangelsdorff’s appearance is one of pure audacity. After hearing that Festival producer Joachim-Ernst Berendt was gathering a coterie of jazz masters for a night of solo music, the trombonist demanded to be included. Unbeknownst to Berendt, Mangelsdorff had been working on his own solo repertoire for just such an occasion. So, on the night of August 19, 1972, Mangelsdorff shared the stage with Chick Corea, John McLaughlin, Jean-Luc Ponty, and Gary Burton, launching a new phase in his career and setting a new summit of achievement for every improvising trombonist to follow.

Naturally, Fiedler has studied the work and techniques of Mangelsdorff and all the master solo trombonists. Mangelsdorff’s angularity of lines and masterful use of multiphonics (the ability to play and sing or hum two lines at once) inspired Fiedler to take these skills even further. Fiedler long had used solo sections or cadenzas in his own performances and even recorded a solo trombone album that was never released. So it was a longtime goal to get his ideal solo project recorded for posterity.

The Covid-19 pandemic provided Fiedler the opportunity to achieve his goal. He knew that to perform the challenging program that he envisioned, he would have to have to internalize it as if it were second nature. Fiedler doubled his practice time every day, developing his compositions and his stamina.

When it came time to record, Fiedler wanted to avoid a typical recording studio and find an inspirational setting with great sound. He chose to record in the beautiful confines of the Howland Cultural Center in Beacon, New York. Over two days at the end of April 2022, Fiedler and his Sesame Street assistant, Tyler Hartman, recorded the music for Solo Bone.

The material that Fiedler composed for the recording is varied and engaging. He wrote the pieces intentionally, trying to create a narrative arch throughout the pieces. There are dynamic contrasts in structure and his own playing to keep listeners engaged, though there is always a focus on maintaining a songlike narrative. The two initial pieces of the recording, “Otter Cam” and “’72,” were originally composed for the Jazz Gallery’s Lockdown sessions, live-streamed solo performances that the venue began during the pandemic.

The program begins with a nod to trombone great Grachan Moncur III’s great tune, “The Coaster.” Fiedler’s “The Jack Rabbit” is named for a famous Pittsburgh roller coaster and takes the trombone on a ride exploring wide ranging intervallic multiphonic lines and plunger mute- generated rhythmic devices. The spirited “Otter Cam” is inspired by these frisky aquatic mammals and developed through Fiedler’s own creative practice and play, the composition combining two separate pieces with an improvised bridge. The title being a meshing of last names for his and his wife’s household, “Fiedlowitz Manor” begins as a floating ballad that flows through shifting tempos and rhythms into an enthusiastic shout section only to resolve back to its mellow opening theme. “The Long No” highlights Fiedler’s circular breathing ability over a three-part suite in which he establishes a melodic theme over a set pedal tone, closing with a classical cadence a la Mozart.

Fiedler pushes the limits of a Chicago Stinger mute on “The Stinger,” a piece in which the trombonist creates rhythmic effects with the added use of plunger mute and a sort of Coltrane- inspired sheets of sound with the Stinger’s buzz. Fiedler sets up a blues-like groove to play around with challenging tritones on “The Empire Trail,” which he commands masterfully. True to its title, “Sisyphean” was one of the most difficult pieces to complete. Fiedler deconstructs his beloved Latin clavé into an incredible exercise in multiphonic ugly beauty. Alluding to the year of Mangelsdorff’s revolution, “’72” tries to find how many intervals can be explored using multiphonic playing over altered dominant chords.

Radical advancements in approaches to accepted music making should be celebrated. When Albert Mangelsdorff took his solo trombone playing into the spotlight in 1972, he put the improvisational music world on notice. Joe Fiedler has taken this inspiration and the threshold of the trombone’s limits even further in his remarkable recording, Solo/The Howland Sessions.

Recorded and mixed by Tyler Hartman. Mixed at Hideaway Studio

Special thanks to Craig Wolf

For Shari and Cleo

Dedicated to the 50th anniversary of Albert Mangelsdorff’s first solo trombone concert at the “Jazz Now!” festival in Munich Germany, celebrating the opening of the 1972 Summer Olympic Games.